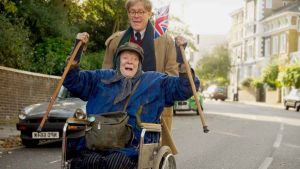 The film version of Alan Bennett’s acclaimed stage play, which tells the true story of his strained friendship with Miss Mary Shepherd, an eccentric homeless woman whom Bennett befriended in the 1970s, before allowing her temporarily to park her van in the driveway of his Camden home. She stayed there for 15 years. Maggie Smith reprises her stage role brilliantly; Miss Shepherd is ‘a tottering, staggering force of nature’.