Originally known as The Cinema and operating from at least 1925, this cinema operated on the ground floor of the Town Hall, it was later renamed the Little Cinema. The cinema could seat just 178 and as operated by Leon Lennard. By WWII Mr Edwin Pearn of the Regent had taken over. BTH: British Thomson Houston sound was installed but the cinema closed after Mr Pearn’s death in 1949.

There was originally a small foyer building attached to the town hall that acted as an entrance to the cinema. This resembled a “pavilion” with eastern influences. Today the room is a market. There is evidence that the beams on the ceiling were cut out to allow for the beam of the projector, and amazingly the stage and curtains are still in situ. 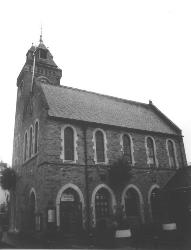 Opened on 17th March 1933 by Thomas Angear and seating 327, the Pavilion had a commanding position right next to the river and the towns main bridge. It must not be forgotten that when built, Looe was a busy fishing port. The entrance was facing the side of the bridge and as a result lost some of its presence. The proscenium was 18′ wide.

The cinema was taken over by Edwin Pearn 6th April 1939 and the name changed to Regent, the sound system was Gyrotone. There were also modifications to the facade. With the passing of Mr Pearn in 1948 Mrs S B Pearn took over. Although still run as the Regent cinema, the building was altered in 1949 for additional community use, known as Polean Pavilion. The alterations were made to allow stage plays to be shown, a large stage was added, resulting in the loss of seating, and the entrance was moved to the river side where a veranda was built overlooking the water. Films ceased around 1960.

In recent years it has become an indoor market on the ground floor and a new floor added for an amusement arcade above. An additional walkway bridge now accesses the upper storey above the foyer entrance. 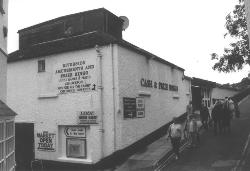 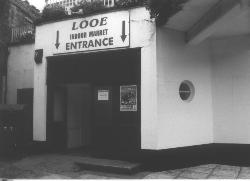 The most recent cinema in Looe has to have been one of the oddest little operations of the near past. It was situated in Higher Market Street, on the first floor of a traditional building of a type commonly found in the fishing ports of Cornwall. So unassuming I walked straight past it on my first visit and it did not even have a name. The cinema was run by Michael Lee single handed. He also ran the Olde Fisherman’s Arms pub. The cinema had a 12′ wide screen and provided a cinema outlet far from any others during the holiday season, and served Looe and the area for a number of years. The projector used here had come from the Princess Theatre, Torquay, where it had been used to show advertisements.

The 95 seat cinema closed in the Autumn of 1999 and did not reopen the following year. It was said that a rent increase was its demise. The last film shown was Eyes Wide Shut. The building was converted to offices. The projectors went to the new cinema at Kingsbridge, Devon.

Many thanks to Clive Polden for allowing us to reproduce this information.