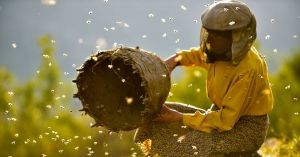 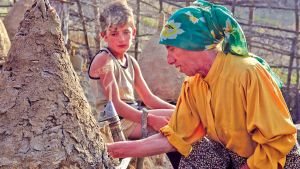 In a deserted Macedonian village, Hatidze, a 50-something woman, trudges up a hillside to check her bee colonies nestled in the rocks. Serenading them with a secret chant, she gently manoeuvres the honeycomb without netting or gloves. Back at her homestead, Hatidze tends to her handmade hives and her bedridden mother, occasionally heading to the capital to sell her wares. One day, an itinerant family settles next door, and Hatidze’s peaceful kingdom gives way to roaring engines, seven shrieking children, and 150 cows. Yet Hatidze welcomes her new neighbours , however soon the itinerant family’s patriarch makes a series of decisions that could destroy Hatidze’s way of life forever.

The most awarded film out of this year’s Sundance Film Festival, winning the World Cinema Grand Jury Prize, a Special Jury Award for Cinematography, and another Special Jury Award for Originality. HONEYLAND is a visually stunning portrait of the delicate balance between nature and humanity that has something sweet for everyone.